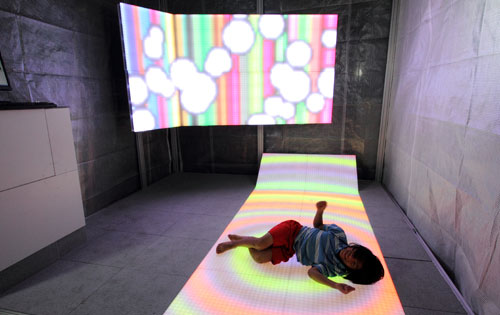 Madbutter had a fantastic time at the 2010 Bklyn Designs show on May 7th-9th. The show was well-attended, there was a lot of nice work by a bunch of great designers, artists, artisans and craftspeople, and my booth was full the whole time. Sometimes too full! Attendees who wanted some hands-on time interacting with the panels had to run a gantlet of a dozen high-spirited youngsters who were absolutely addicted to rolling around on the floor panel. Seriously, someone needs to put one of these in a Children’s Museum if not in every daycare center in the country!

I had lots of good interaction with thoughtful and supportive people in the design business as well as ordinary civilians. And got lots of good press, too. Every blog I saw that covered the show wrote something favorable about my booth and I got mentioned as one of the top highlights of the show dozens of times. Favorite design blogs like Apartment Therapy and Design Sponge covered me, as did the Wall St Journal (and here), NY1, and the Daily News. The latter published a big spread about Madbutter in the print addition with a big juicy photo. Also PSFK, a culture and technology trend spotting site I highly recommend.