I’ve just put up a new piece I am very excited about called “pretty ugly” in the windows of the old Donnell Library building on 53rd St between 5th and 6th Avenues, opposite the Museum of Modern Art. Like the Lexington and 33rd St installation, this is done through the arts organization Chasama. This piece inaugurates their use of this building as an exhibition space, which has been empty since an aborted deal by a hotel developer to take over the site and rebuild the library into the lower floors. The Donnell Library is much missed as a NYC cultural institution, but at least Chasama has found away to keep the location in the cultural service of the people of New York and I am happy to be apart of this.

This new piece is a triptych: there are three 6’x4′ LED video panels each in its own window bay. For the content I filmed close-ups of children who were prompted to make faces conveying certain random moods or expressions. Two layers of this video are simultaneously displayed on the panels and users can interactively manipulate rectangular “holes” in the top layer to reveal the video below, creating a “hybrid portrait” of a hybrid person with a hybrid expression. The work was inspired by some playing around I was doing with the Exquisite Corpse idea, the surrealist parlor game that has been re-purposed in a variety of different form and media over the years and by the (not unrelated) musical mash-up scene. In both these forms there is an interesting tension between the mind’s simultaneous recognition of the autonomous integrity of the elements and its attempt to cognitively reconcile them into a new cohesive composition.

The work is also multi-user and collaborative: participants interacting with the two outside panels change the color tinting of the layers and can remix the portrait combinations by scrolling the images horizontally. The composition on the display is therefore at any given moment the cumulative state of the piece after purposeful or exploratory interaction from random people passing by. The resulting juxtapositions of faces and their expressions – whether the effect is startling, comical, bizarre, endearing, incongruous, or harmonious – are the sum consequences of this interaction. 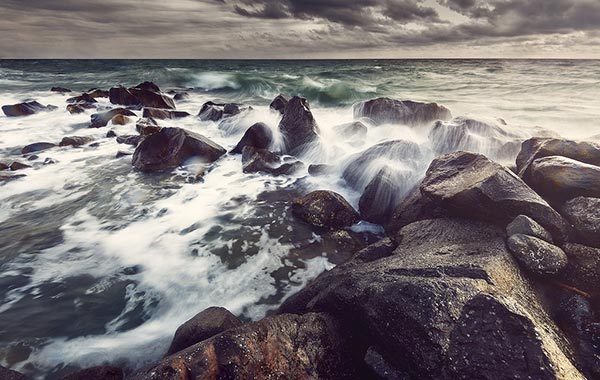